[http://hum.gu.se/institutioner/kultur-estetik-medier/musikvetenskap/publikationer/uppsatser/] This text was originally a paper in musicology, written in Swedish in 1996-97 and now found at [http://www.muslib.se/home.html] The Music Library of Sweden

The Song of Blondel: ”Suche treu, so findest du”. Tales of imprisoned souls and liberating music.

Just like there are many novels written about writers writing novels, there are lots of music written about music and music-making. I am using the term meta music for that kind of music within music; which also is music meant to tell us things about the history and conditions of music itself. In some cases these musical stories describe how a songwriter (composer) struggles to express his (her) feelings for the adored person, and how he (she) wishes to send the result as music to her (him) alone, or, in cases of mild to severe megalomania, distribute it to the world as a whole.

Another meta musical category is songs that speak about the power of music: to signal, to call up memories and arouse emotions, to unite a group of people, to liberate from prison, and to heal from disease. Here we can find examples ranking between the simplest come-together-and-be-happy tunes for pre-school children, to utmost musical sophistication. Remember the many beautiful constructions that are composed around the myth of Orpheus — that musician, who persuaded the guardians in Hell with his moving music, only to fail in his quest because he couldn’t imagine the wife was following him. Roland Barthes interprets this myth like it speaks of the birth of Musicology itself: Orpheus, with his re-view of (his look back at) the ”object” Eurydice, is the first music critic in history! Thus, he learns his lesson, sacrifices the Queen, makes for his ascension to a better place — and serve Apollo for the rest of his afterlife, rich in experience and knowledge [Engh 1995:69f, in Solie (ed) 1995].

Among the Biblical myths about the powerful and beautiful art of music, are some stories of walls falling down by the effect of organised sound, like the city of Jericho, and one prison where Paul was suffering on his travels.

Many such myths have inspired to musical interpretations. A Grimm fairy tale, with possible musical settings (which I have not tried to track down), is Rapunzel. The girl with that name was put in a tower without a door, only windows, by a witch who took the baby girl from her parents in exchange for some leaves of the special rapunzel salad (a kind of lettuce), since the father had stolen those tempting vegetables from the witch’s garden to give to his pregnant wife. The girl grew up alone in the tower, singing for herself far from other people’s attention. When the witch wanted to visit her protégé, Rapunzel had to toss her braide of hair down for the visitor to use as a ladder. The inevitable prince (this is a fairy tale, for heaven’s sake!) enters in the same manner, after his interest is aroused by the singing. The witch interrupts the happy couple, and throws them out of the tower. First the prince, right out of the window. He falls in a thorn bush and hurts his eyes badly. Rapunzel is led away in another direction, where she goes on singing her song, until the prince finally re-arrives and recognises the song. His blindness is cured by Rapunzel’s tears of joy.

This tale is a nice story about how music can be of help when finding and rescuing prisoners from mystical towers. A more common situation in poetry, romantic pictures and music-dramatical works has for a long period in Western art history been the serenade. A man sings outside a tower or a house to make himself known, and entertain the adored one with sweet music. In Blondels Lied, the person inside the prison is a king, Richard Coeur-de-Lion, and the person singing to the imprisoned one is also a man, the king’s legendary minstrel Blondel de Nesle.

1.2 My two studies, their questions and methods

In my first study (Ljungdahl 1996) about Robert Schumann’s song Blondels Lied (Op. 53:1) I tried, among other things, to find the answers to my initial question, which was simply: what is this song about? My voice teacher in 1992, Hans Linden at Sankt Sigfrids Folkhögskola in Växjö, gave me the song and the challenge to do research for interpretational ideas. The lied is not among the well-known Schumann songs, like Dichterliebe, or Frauenliebe und -leben, so a source of information or a recording was not the easiest to find. (Since then, after 1997, the fine Hyperion Records’ issues of Schumann’s songs, with the pianist Graham Johnson’s interesting and extensive booklet comments, have changed this situation.)

My general aim with the second study (Ljungdahl 1997) then changed to be a research of the points where the Blondel legend focuses three time periods’ mutual relations and their ideologically coloured interpretations of the unhistorical story of Blondel and Richard. For example, Schumann’s ”Blondel” was created in 1840 in a tradition and milieu having very little common with on the one hand trouvère songs from the Middle Ages, on the other hand matiné movies from the 1950-ies — but both these latter examples are today natural references to the Blondel & Richard story. Works on the Blondel theme from different periods stand — with a few exceptions — practically isolated from each other, both stylistically and in their emphasis on different parts of the story. The meta music, the song used as signal between the protagonists, can’t be tracked from any tradition but varies just as much as the rest.

In my essay I wanted to show that the interpretation of a 19th century song can be grounded in three time aspects, here concentrated around 1190 (the time of the story), the first half of the 19th century (the time of the composer), and the second half of the 20th century (the time of the interpretation). I have studied what we today can know about the legend’s origin; I have searched for other works on the same theme, which could have been inspirations to the text and music in Blondels Lied; and I have given examples of how the same protagonists are presented in works from our own time.

The content, meaning and moral of the story varies with different periods and works. The 13th century (fictional) cronicle focuses on history and tries to rise the status of the musician. In the 1780-ies the story is used in an opera with pre-revolutionary aristocratic liberal ideas. In Schumann’s time, 1840, German heroic poems tell tales of English Medieval kings and minstrels. In the 1950-ies, during the Cold War, the movies present Anglo-Saxon folk heroes like Robin Hood and Ivanhoe. In the 1970-ies the musical movements seeks roots in folk music, troubadours, and Early music. Lately, in the 1990-ies, the focus is on myths and cultural studies. 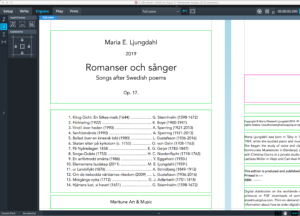 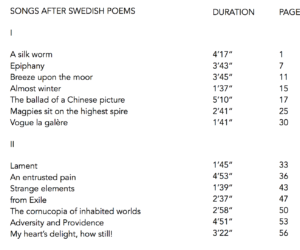 So Long Ago (Izabella)

In the eyes of Izabella,
any man was good as gold.
That precisely meant a fellow
could be sized for lies he told.
Shiny, sticky, stiff and old.
Always right and often cold.
Bye, so long, so long ago!

Hey, nonny, nonny.
Hey, nonny, nonny no.
Fol de rol, and fol de roodle.
Wotcher cock and howdy doodle.
There lived a lass, and also lackaday.
Men were deceivers, or so they say.

Lonesome in brittle dory dares the
sailor set sail for the deep, wide waves;
boreal aurora-flaming stares the
night at his unseen, roaring grave.
Forward! his fate commands on-board;
and in the depths lives, like in the heavens, the Lord.

New arrangement of Scarborough Fair – listen, buy and print out here from the Maritune Music shop at the SibeliusMusic.com publishing web site!

Version of Scarborough Fair with a written guitar part.

The ballad “Scarborough Fair” is one of the most well-known old folk songs that got popular in our time through recordings and performances in the folk and pop scene of the 1960-1970 period.

The text in “Scarborough Fair” is closely related to other old ballads, for example, “The Elfin Knight” and “The Cambric Shirt”.

The content has been explained as a list of impossible tasks that the distanced lovers ask each other to perform in order to prove their love and worthiness again. It can also be read as an exchange of subtle insults with references to their character and/or body parts. For example:

1) “Wash it in yonder dry well”, meaning perhaps a person with dry eyes, not easily moved to tears,

2) One of the lovers has got a sharp tongue, a “sickle of leather”,

This is not a critical edition made in accord with scholarly expertise but a contemporary interpretation made with artistic license. ‘He’ and ‘she’ is alternating in this version. The demo is just a quick demo, not a good performance or production!

—
New music, composer news, poetry, links and other things from the team members, editors and friends of The Sibelian Conspiracy