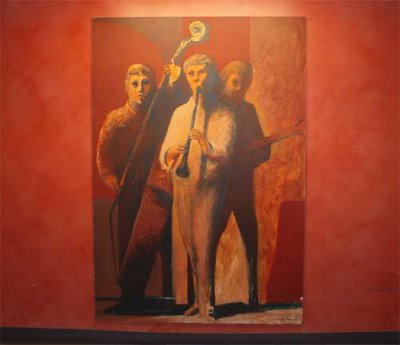 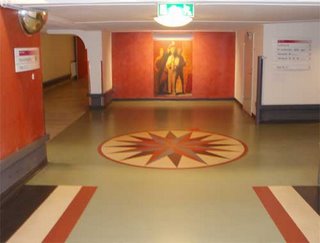 “The soul unto itself
Is an imperial friend, —
Or the most agonizing spy
An enemy could send.

Secure against its own,
No treason it can fear;
Itself its sovereign, of itself
The soul should stand in awe.”

The notion that the Gulf Stream is responsible for keeping Europe anomalously warm turns out to be a myth, writes Richard Seager, of Columbia University Earth Institute, in an article (based on a study he and colleagues published in 2002) in American Scientist:

“What we found in these tests was that, south of northern Norway, the difference in winter temperature across the North Atlantic was always the same, whether or not we let the ocean move heat around. This result would suggest that oceanic heat transport does not matter at all to the difference between the winter climates of western Europe and eastern North America! We concluded that the temperature difference must, as we had speculated before, be caused by other processes, most likely the seasonal absorption and release of heat by the ocean and the moderating effect this process has on maritime climates downwind.

Our revised view of things did not, however, mean that heat transport in the ocean does not influence climate. The ocean indeed absorbs more heat from the Sun near the equator than it loses back to the atmosphere (primarily by evaporation). And oceanic currents indeed move the excess heat poleward before releasing it to the atmosphere in the middle latitudes. Consequently, removal of the oceanic heat transport globally in our modeling exercise warmed the equator and cooled everywhere else. The climates produced by the models deprived of oceanic heat transport were colder in the subpolar North Atlantic by as much as 8 degrees in some places. The cooling over land areas was more modest, typically less than 3 degrees. These temperature changes, large as they are, are not terribly dramatic compared with the much larger temperature contrast across the North Atlantic Ocean.

Why doesn’t the ocean exert a greater influence on North Atlantic climate? According to scientists’ best estimates, the ocean and atmosphere move about an equal amount of heat in the deep tropics. But at mid-latitudes, the atmosphere carries several times more heat. Thus, if one considers the region north of, say, 35 degrees North, the atmosphere is much more effective than the ocean in warming winter climates. Also, the winter release of the heat absorbed during the summer is several times greater than the amount of heat that the ocean transports from low to high latitudes in a year. Hence it is the combined effect of atmospheric heat transport and seasonal heat storage and release that keep the winters outside the tropics warmer than they otherwise would be—by several tens of degrees.

Although these numbers are instructive, they are not directly relevant to understanding the warming of Europe. For that, one needs to consider some details of geography. The Gulf Stream and associated current systems in the North Atlantic focus heat (and lose it to the atmosphere) in two clearly defined areas. One is immediately to the east of the United States, where the warm Gulf Stream flows north after leaving the Gulf of Mexico and rounding the tip of Florida. During winter, the prevailing winds blow frigid, dry air off the North American continent and across the Gulf Stream. Because of the large difference in moisture and temperature content between air and sea, the heat lost from the ocean through evaporation and direct heat transfer is immense—a few hundred watts per square meter. Much of this heat is picked up by storms in the atmosphere and carried over the eastern United States and Canada, effectively mitigating what would otherwise be a cold continental climate.

Where else does the Gulf Stream deposit its heat? After departing the American coast, the Gulf Stream heads northeast and turns into what is called the North Atlantic Drift and, farther downstream, the Norwegian Current. After spawning many Atlantic storms, it loses most of the remainder of its heat in the Nordic seas. There the heat can effectively be moved eastward by the prevailing winds to warm northwest Europe. Thus the transport of heat taking place in the North Atlantic warms both sides of the ocean and by roughly the same amount, a few degrees. This leaves the much larger, 15-to-20-degree difference in winter temperatures to be explained by other processes.”

This afternoon, we have over +30 (C) here in Stockholm, and reports of tropical night temperatures (over +20) also in other parts of Sweden last night.

Kyle Gann in PostClassic has a long post about American art and music, American Romanticism: Music vs. Painting, with a discussion of what was new and specifically American in the Hudson River School of painters, and then in comparison how little original their contemporaries among composers were:

“Their music is a pale imitation of the European aesthetic of their day. In vain one listens to their symphonies, tone poems, piano pieces, and string quartets, for a new feeling for melody, a new sense of form, a departure from Europe. They were timid. Their emphasis was not on a bold new beginning, but on a sense of correctness, a balance learned rather than created, and a desire to impress. At their very best – as in, say, Chadwick’s string quartets – one finds an energetic smoothness, but even here the music seems to plead, ‘Look – I followed all the rules. Isn’t that enough?’ “ 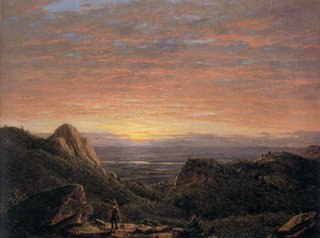 When I told my friend Pat Ross-Ross that I have started to paint in oil, and thought both landscapes and portraits were interesting to try, he mentioned The Group of Seven, and suggested I looked at the works of these famous Canadian painters, to see if my idea of Northern landscapes resonated with theirs. Yes, maybe. And then I read that some of the painters in the Canadian Northern school were inspired by the Scandinavians of a generation before them… If I understood this right. 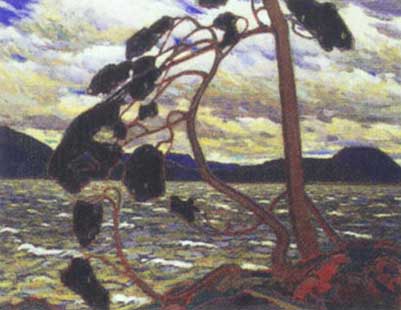 The Nationalmuseum in Stockholm will host an exhibition in the autumn 2006, with works by romantic and early 20th century landscape painters from the Nordic countries. (The exhibition is in Helsinki this summer, starting in Stockholm on 30 September, will be in Oslo in spring 2007, comes to Minneapolis in the summer 2007, and then last stop is in Copenhagen in the autumn 2007) 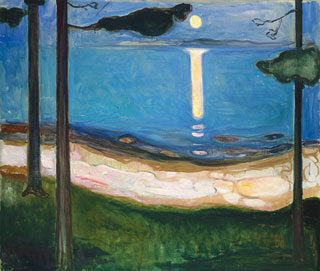