The only album with Cris Williamson’s songs I’ve ever listened to is her very first record, “Cris Williamson”. I found it for less than 20 SEK in the bargain bin in a record store in Stockholm around 1975, without knowing anything about the artist. I liked the music and her voice very much, so the album has been a treasured favourite even if I haven’t been able to listen to it for years.

Now I’ve finally got a cd of a reissue through CD Baby in the mail just today, and have played through the songs that I remember so well: “Waiting”, “The Last Sweet Hour”, “Rebecca”, “The Frontier”, “Make Me Not A Stranger”, “James”, “Number One” and “Joanna”. 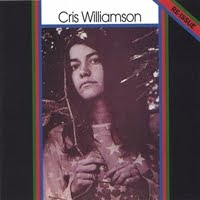 Here is another version of “Joanna”, which I found on Youtube. The other songs I like are harder to find online, it seems. I don’t know why, but it could have something to do with the fact that Cris Williamson became an icon for some sort of women’s music movement with her later albums and performances during the 1970’s, and that this influenced which songs have stayed popular with the audience. Just a guess.

“Joanna” by Cris Willamson, sung by the singer/songwriter herself and by Meg Christian.