This morning, while I breakfasted on instant coffee (with milk) and a double toast with cheese, I listened to an orchestra piece by a composer friend from UK. He wanted comments about the premiere recording, and help in deciding if the work is suitable to expand into a symphony. As it is now, the piece is in my opinion a kind of colourful ouverture; complete as a short (ca 12 minutes) story about a part of England’s history of wars, but not satisfying without some more development and changes as a symphony movement. The composer has used a recognizable song theme as a nice gimmick – successful in the ouverture version, but in the many repetitions of it it needs to be more disguised to work in the different context of a symphony. I also think the ouverture ending is too much a triumph march à la Star Wars to be convincing in a serious symphony. I know John Williams borrows all his ideas from older masters of symphony, opera and film music writing, but I say what I realize most young listeners today will think, with the references they have to orchestra music being mostly contemporary film scores. (My friend told me later that the obvious reference for him here is Walton’s music). I am not competent enough in the craft of composing and/or analyzing to judge if the material in the ouverture in itself – after proper development of more themes and transitions from it – will suffice to base a whole symphony on. So my idea is to use it as a first movement in a symphony on the extra-musical theme of (British?) war history – with its many aspects of ideology, duty, leadership, collective suffering, and short triumphs.

After listening to this new British music, I put on a cd with a somewhat older symphony on a more recent war theme: the Finnish composer Einar Englund’s first symphony (from 1946). It is not fair to compare the two works, but since I am not interested in using concepts as minor-major-mediocre to label composers, there is no harm in it either. The neo-classic post-Sibelian symphonist Englund can be inspiring for a younger composer, without being dispiritingly impressive – as maybe Prokofiev or Shostakovich are as role models. Englund’s music was a sensation of modernism when it was new – at least in Finland. Now I think it sounds good, but it is audible (the harmony and some of the orchestra tricks) that the work was written in the 1940s, by a young man who was not only just home from years in a horrible war that had interrupted his conservatory training, but also an experienced improviser and jazz/entertainment musician, who surely listened to sounds from other music worlds, outside Finland and the Sibelius Academy. In his second symphony, which has been called “The Blackbird”, his memories from war are told in music, too, and set in a thematic contrast between Nature (the bird song) and Culture (the war sounds). You can read about Englund:

A remark made sometime in the ’50s is still often quoted: “As a composer, Englund is the salt of the earth.” The comment illustrates the key position held by Einar Englund (1916-1999) in postwar Finnish music. The premiere of his First Symphony in 1947 marked a turning-point and heralded a new era in Finnish music. Englund gave voice to a young generation which had survived the war and lost all its illusions, and in so doing he swept away the lingering National Romantic idyll. It was also no mean feat that he succeeded in rejuvenating the symphony, the most highly valued genre of all in the land of Sibelius. 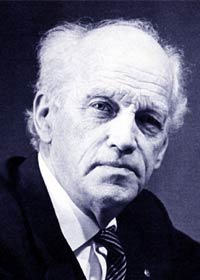 Ever since his breakthrough years, Englund’s style was associated with Neoclassicism, and his music shows affinities with Prokofiev, Shostakovich and Bartók’s late period. His œuvre, stylistically coherent, is dominated by rhythmic drive and a clear, powerful orchestral sound with frequent use of doubling, with a melodic-harmonic thinking peppered with dissonances but founded solidly in tonality. Dense motivic work and thematic thinking underlie his compositions. Englund favoured the established genres symphony, concerto, sonata and also cultivated traditional forms in the individual movements of his works.

Englund was an accomplished pianist, and often moulded his material at the piano. “I play through my material hundreds of times to tes t it for its fatigue point. Only if the musical idea retains its original freshness despite wear is it worth keeping”, he has said. It is not surprising that the efficient use of instruments and unaffected expression were his guiding principles.

The war was generally perceived as the work’s psychological background, echoed in the heavy tread of march rhythms and the desolate melancholy of the slow movement. The composer, however, later rejected the epithet War Symphony, preferring to characterize the work as “the joyous shout of a young man who survived the war”. [Kimmo Korhonen (1995)]